Skip to content
Posted on April 30, 2016Author markfineart No Comments on Beijing Sketches 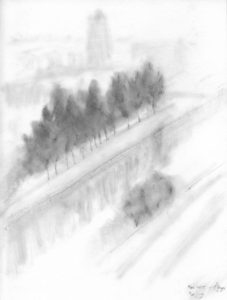 A canal viewed from my hotel room window – Beijing sketch

I was lucky enough to accompany my Lady to Beijing this past November while she was there on business. A couple of Beijing sketches are the proof of that. It takes 12 timezones and 13 hours in the air to get to Beijing. Which actually means you land within minutes of takeoff but the next day when heading to Beijing. When coming home we landed within a few minutes of departure of the very same day – an odd but cool result of international time convention.

Beijing is very close to the longitude of Toronto. This means that – all things being equal – they have the potential of having the same weather. I brought mid-Fall clothes and found I’d dressed appropriately.

An obvious but true fact. In Toronto you go out for dinner and need to decide whether you getting Thai or Vietnamese, French or Italian, Sri Lankan or Indian, Chinese or Korean etc. The international food options in this city are both varied and delicious. In Beijing, you go out for food. That’s it. Your choice is the level of the decor, as in do you eat from a street truck or a hole-in-the-wall, do you eat in a nice little place or a fancy restaurant with classy decor. The food is always and everywhere what I would call Chinese food. You don’t go out for Chinese food in China. You just go out for food. Obvious but true.

The subway system in Beijing is very complex. That said, if you make sure before you head out that you have a very clear idea how to spell your final destination stop using the Latin alphabet of 26 characters common to English speakers, you will have no real problem. The subways are very clearly laid out and intuitive. If you have a map to help with communicating with the ticket sellers at the subway entrance you will always buy the correct pass (the further you travel the more it costs). I was a figure of conversation. I was the only European looking passenger I saw, ever, when riding the subway. Being blond made my difference from the Asians around me even more evident. Monks and little old ladies would stare and stare, laugh and laugh, enjoying the surprising spectacle of a white man standing near them.

The weather usually cooperated when I did things like visit the Great Wall, the Forbidden City, Tiananmen Square, the Temple of Heaven or the Summer Palace. BTW I really liked how the Temple of Heaven was such a people place. This is where I first saw the Peking Opera, where assorted people would gather and play traditional instruments while members of the audience took turns singing traditional sounding songs. An older man was doing beautiful calligraphy using a large mop-like brush – drawing the characters on the sidewalk with water. It was very moving, actually, watching him work and seeing the words fade into mist and disappear as he moved down the path with his large brush.

The weather was less cooperative on the days I had to myself while my Lady was working (cold and rainy). I only managed to do some drawing and that was from my hotel room or sitting in the lobby. I tried something new, which was use graphite powder and makeup q-tips for parts of the drawing. It was an intriguing look, and I loved how the few drawings I actually got done had a very distinct look to them – or at least distinct from my usual run of sketches. Here they are. 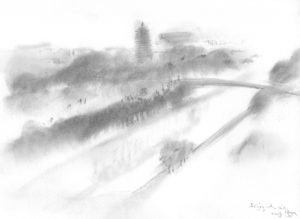 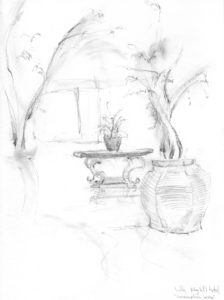 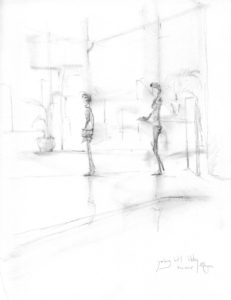 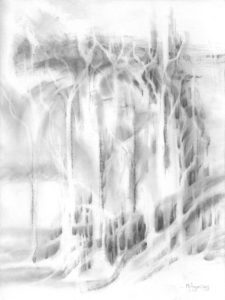 A concept drawing of the “feel” of Beijing in the fall 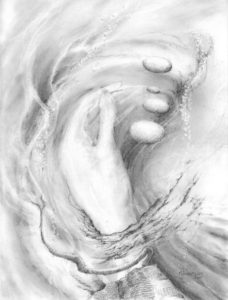 Another concept drawing from Beijing 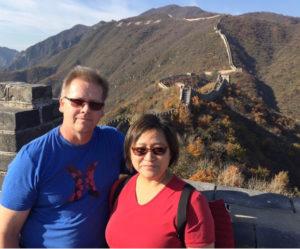 My Lady and Moi at the Great Wall of China

This site uses Akismet to reduce spam. Learn how your comment data is processed.